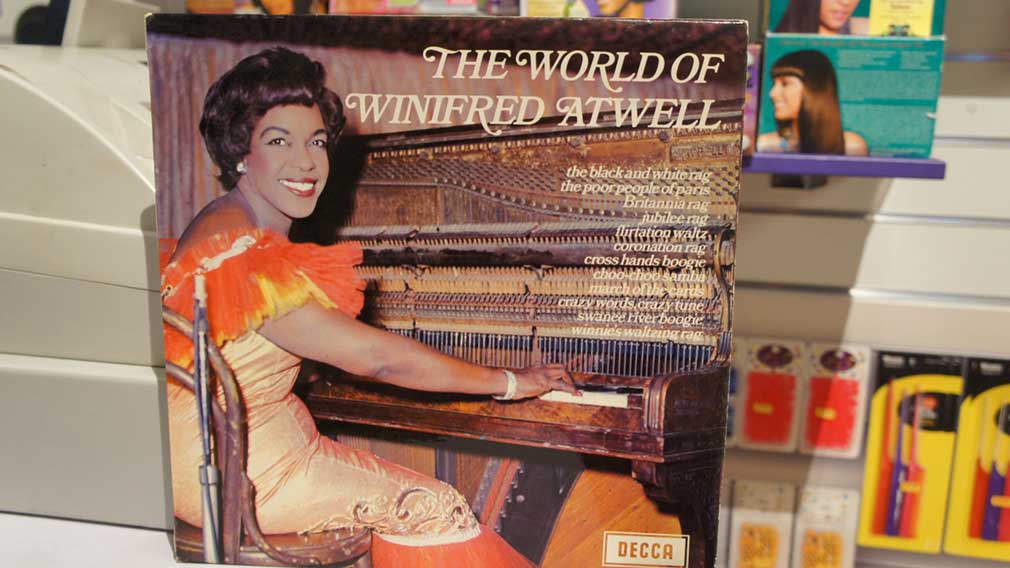 Exhibitions Hair History Women
Winifred Atwell's Brixton salon was a space where Black women could relax and be pampered. She should be remembered not only for her music, but for being a hair entrepreneur.

Hairstyling and hair care in the 1950s was dominated by white men. But Winifred Atwell used her background in chemistry to create products that challenged approaches to Black hairdressing.

Whilst there was a growing Black middle class prior to the First World War in England, it was not large enough to support a specialist hair care industry. Mass migration after 1948, marked by the landing of HMT Empire Windrush, was a turning point. There was a new opportunity for Black hair and beauty products.

Hair in the home

In the UK, there were no hairdressing salons that specifically cared for the hair of Caribbean migrants in the late 1940s and early 1950s. Grooming and hair care took place in the home.

For professional Black women, where appearance was paramount, options were limited. There were very few, if any, women to support them in styling their hair. Very few white professional hairdressers understood their hair care needs. They would often feel let down by what was offered to them. They needed a space that specifically catered to their needs.

By 1955 Winifred had achieved a level of fame in her music career that meant she had the financial means to create this space.

Winifred’s salon opened in Brixton. It was an area she was already familiar with because of her business interests in the area. Brixton also had one of the largest Black Caribbean populations in London, and so had a steady stream of clientele.

Winifred not only had background training as a chemist and an understanding of the pharmaceutical industry, but also business acumen. All of this meant that she was well placed to create the Winifred Atwell Salon.

She created new hair treatments to straighten and care for black hair. She also designed skin coloured stockings and tights, and makeup for darker skins.

The 1956 opening of her salon was showcased in both the national press, and in this Movietone newsreel.

The salon was an open-plan contemporary space with a television and coffee machine. The space was designed to be aspirational, as well as catering to the needs of clients.

Images of the interior of the salon show a luxurious space, which Winifred decorated to remind her patrons of the Caribbean, or as she would say, home. She wanted them to feel comfortable and pampered. However, papers described the space as ‘exotic’.

Winifred was a style icon and innovator.

We can see from her record sleeves that as she grew in popularity she moved away from the conformity of straightened hair. As she continued to make records she adapted her look. The use of wigs emerges in later images of Winifred, giving her a more contemporary appearance. We also see more of her natural hair. 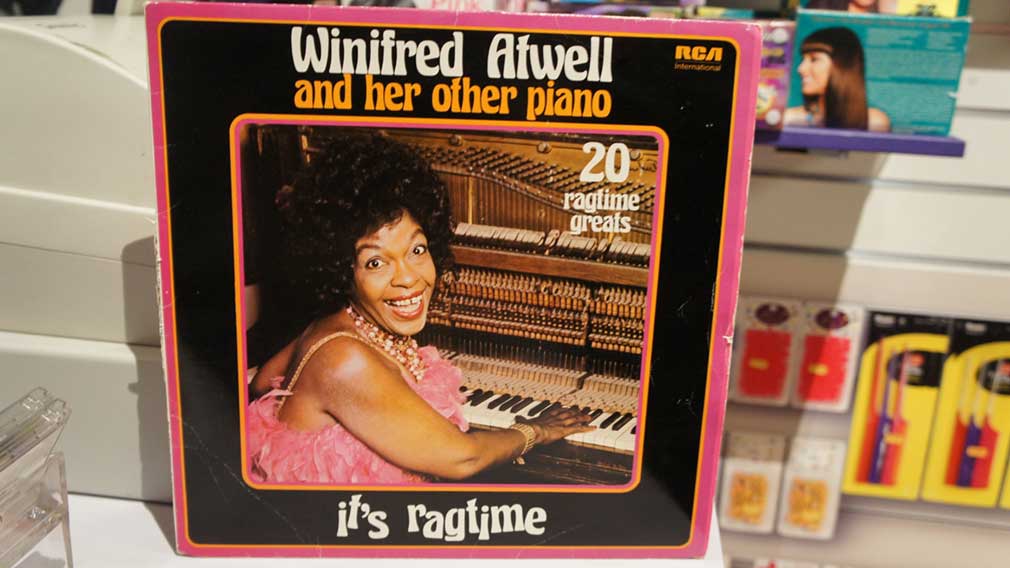 Winifred Atwell and Her Other Piano album cover

Winifred’s record sleeves, which span several decades, also demonstrate the way that Black hairstyles are used by record companies to promote an artist.

For me, they are also a record of how a famous Black woman styled and took pride in her hair, telling the world ‘this is how I want to look’. This was at a time when Black hair salons did not exist in the UK and products to style our hair were few and far between.

Winifred paved the way with her amazing vision. Although her Brixton store was destroyed in a fire, she opened up a second store in Mayfair. She stood her ground against the male hierarchy that existed around hair.

Winifred was not the first Black woman to open a salon. In 1955 Carmen Maingot had opened her salon in London’s North Kensington. It’s rooms were decorated by fellow Trinidadian artist and designer Althea McNish.

What both Winifred and Carmen represented was the ability of Black women to identify business opportunities that showcase technological thinking alongside entrepreneurial spirit.

By the mid-sixties, and inspired by the work of Winifred and Carmen, new female hairdressers began to emerge outside of London.

Hair: Untold Stories has now closed at the Horniman, but it is going on tour.

From 1 October the exhibition will be at Tullie House Museum and Art Gallery in Carlisle, before going to Weston Park, Sheffield Museums Trust from February 2023.

Although the number of salons and shops that cater to Afro-textured hair has risen since the days of Althea McNish and Winifred Atwell, in some parts of the UK they remain hard to find. This will be explored further in the exhibition when it opens at Tullie House.

What happens when you can’t decide on your own hairstyle? The 2020 lockdowns transformed how Tinu Adio Pierier felt about her hair.

Cultural Producer and Curator Korantema Anyimadu takes us on a tour of her hair shop installation in Hair: Untold Stories.

Once hair has been cut from your head, do you ever think about what happens to it next? Normally it’s brushed from your shoulders, falls to the salon floor and then is swept up into the bin. But your hair is a remarkable renewable, flexible and adsorbent fibre that could well have another life.
About the Horniman