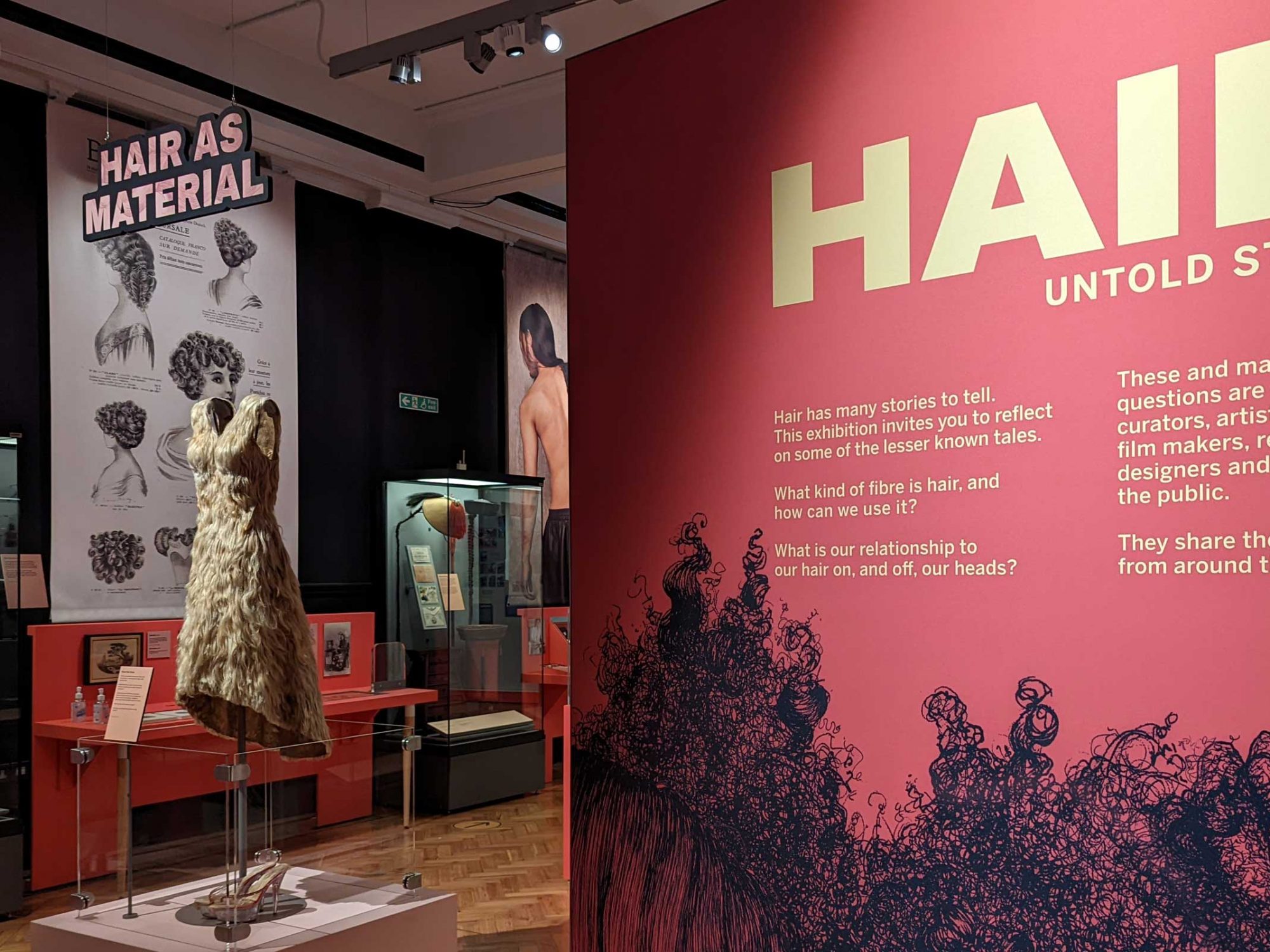 About the art Anthropology Art Hair
Artist Jenni Dutton tells us about her practice and about working with hair. You can see Jenni's hair dress in Hair: Untold Stories.

Hi Jenni, first of all please can you tell us about yourself and your practice?

I’m a multimedia artist living in Somerset. I trained in fine art but my interest in mixed media and textiles grew from a need to somehow construct my own images, usually around the female form.

I found playing with materials and techniques enabled me to explore personal thoughts, feeling, doubts and desires. I make work in series, one being of sculptural suspended dresses. The empty dress conveys absence and loss. I burnt, scoured and damaged the surfaces. I built them up again and a narrative developed as I worked quite intuitively, becoming comfortable trusting my intuition and experimenting with new ideas as they suggest themselves. I worked for probably about 5 years on this series, although I have continued the theme, recently making cloaks to accompany other projects.

For the past 10 years I have been making a series of large scale sewn portraits known as the Dementia Darnings and Absurd Sewn Selfies, alongside being involved with climate activism.

How did the hair dress and shoes come to be?

I made the dress in the early 2000s. I always enjoyed using unusual materials such as feathers, fish skins, tree bark etc. allowing the associations with the material to permeate the work in whatever way it could. Somehow there was always an emphasis on myths, legends and fairy tales.

I was having my hair cut in Toni & Guy in Taunton and chatting to an ex-student of mine about what happens to the hair when it was swept up… and from there the idea came to make a dress covered in discarded human hair.

So I went each week and collected a black plastic bag full of hair. Getting it back to the studio was a treat… mining the layers of hair, often still damp and smelling of conditioner. It felt intimate and slightly creepy.

I made the initial dress form from fine net fabric and started to layer the hair from the bottom up. The form of the dress resembled a bob haircut. I chose blond hair as I felt it was more seductive. It probably took about 6 months to make. Along the way I was interviewed by BBC2 for their programme Contemporary Visions. When the dress was finished I was asked to take it to London or be featured on Chanel 4’s The Big Breakfast and interviewed by Wayne Hemingway.

I made the shoes in 2018. I used as a base a pair of shoes left behind in a friend’s hotel after a stag weekend. I loved the transparency of the form, it worked well with the hair. 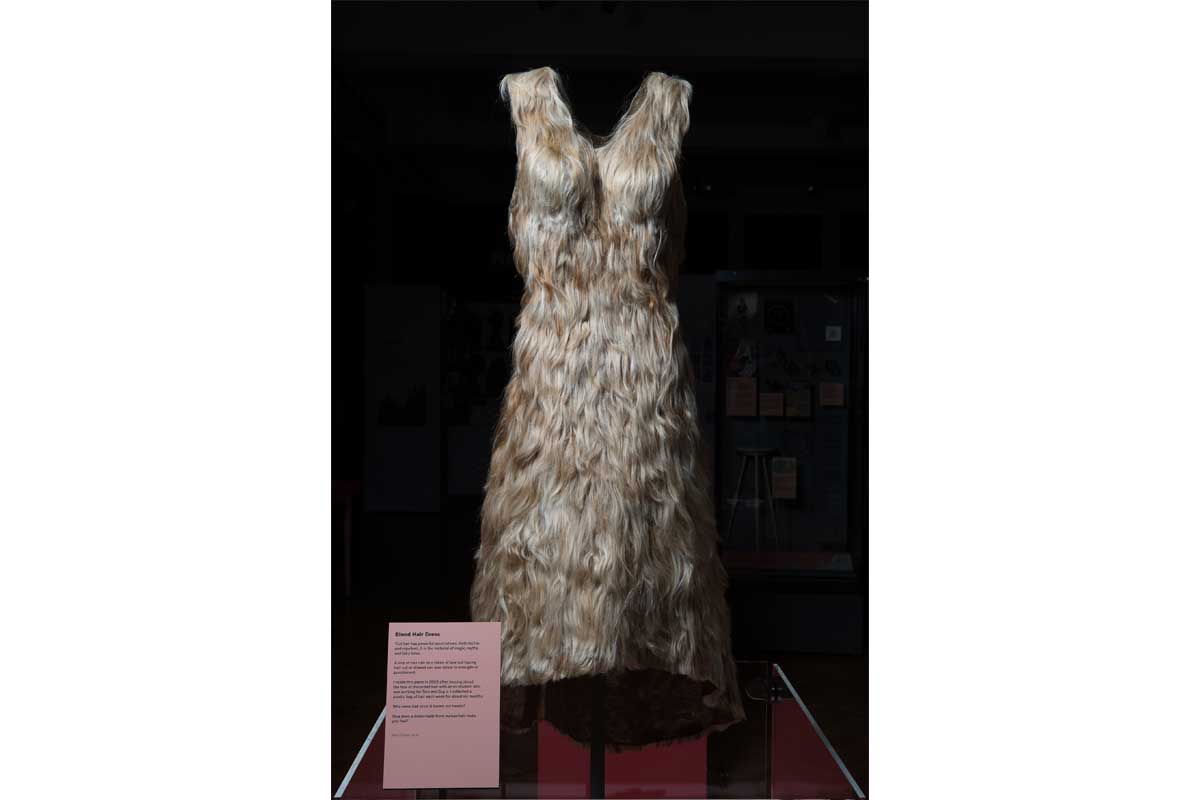 What are the practicalities of working with hair as a material?

It’s very tricky. I have to be very organised and keep my hands clean from glue or it all becomes a mess. It is preferable to use hair cut so it lies in the same direction, ‘from root to point.’ Naturally curly hair is fun to use but needs to be positioned where it doesn’t interfere with the shape of the final form. Left over hair I compost. I’ve been told clothes moths are attracted to hair, so that has been a concern too.

Where does the hair itself come from?

Acquiring suitable hair is always a challenge, but for future projects I have made contact with Green Salon Collective who take 100% of all salon waste, and it is reused and recycled in a variety of innovative ways. I work with local hairdressers and friends also put the word out for me. I will also try an appeal on social media for current work.

What would you like people to take away from your works?

Human hair is a potent material. I would like viewers to consider their response to the work, to question its strangeness, or its suitability and its disembodied presence on the dress and shoes. Maybe they can recall fairy tales, stories, where the narrative hinges around hair. We all have a very personal response to our own hair. Mine is thinning, going grey and too wiry (age!)

What is next for you and the hair dress?

I have been asked to make another hair dress for a museum at the Fashion Institute of Technology in New York. The curator is writing a book about fashion, the body and psychoanalysis and my work would be exhibited in the accompanying exhibition. I will take this request as an opportunity to further explore the material, maybe making more shoes, a handbag, a cloak as well… the hair I manage to collect will determine what I make. Time will tell how my ideas have developed over the 20 years since I last worked in this way.

Find out more about Jenni’s work

10am – 5:30pm
This new exhibition puts the substance before the style and unlocks the…
Find out more
Display
Free

10am – 5:30pm
Cult Hair highlights the power and beauty of people living out their…
Find out more
Event
Free, drop in

Learn to Make Rope from Hair

11am - 1pm,
2pm - 4pm
Find out first-hand how you can use ancient, traditional rope making techniques…
Find out more
About the Horniman