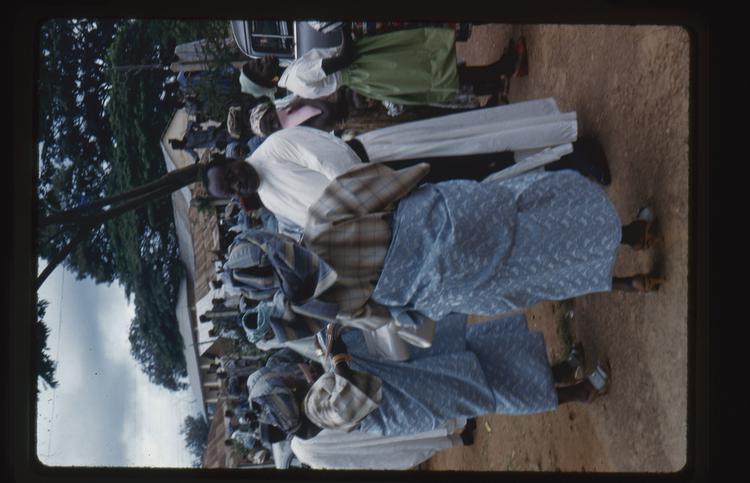 This photograph was taken at the State Service of Thanksgiving for the Independence of Nigeria held at St. James Cathedral, Oke-Bola, Ibadan, on the 2nd of October 1960.

Nancy Stanfield who attended the service alongside her husband took this photograph outside the chapel as the congregation gathered.
The service was delivered by The Venerable Archdeacon S. Vincent Latunde, O. B. E.

Two women wearing similar attire stand together in close proximity – probably in conversation - with, Rev S. A. Banjo who conducted the thanksgiving in honour of Queen Elizabeth & “for those in positions of responsibility & authority, especially the Prime Minister of our Federation, the Premiers of the Regions & all Ministers of State.”
Rev S. A. Banjo (in white priest robe) who would later be appointed Archdeacon is the father of one of Nigeria’s prominent scholar, Professor Ayo Banjo, an Emeritus professor of English Language.
Nancy Stanfield who was a lecturer in Teacher Training in Ibadan was probably a close acquaintance of Rev S. A. Banjo who founded Ibadan Archdeaconry Teacher Training College.
From the photograph, it could be inferred that special attire was chosen by the congregation from the dominant blue colour of women’s headgear and similar wrapper; the men in the pictures are also dressed uniformly in white.

Slide of a sky burial site in Reting